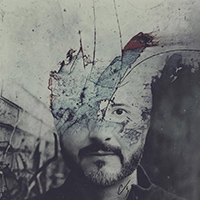 Cash Mattock is a musician, digital collage artist and the author of Esoteric Theories of
Flora, Fauna & the Universe. Cash was awarded a full scholarship to study engineering
at the Rochester Institute of Technology. After attending R.I.T. he studied music at
Nazareth College. He has been a guest on local, regional, and national radio, and he
also has done numerous print interviews. His artwork has been featured in various digital
and hardcopy publications. Cash has over a decade of consulting experience in the
music industry involving management, A&R, P.R., marketing and legal. He has recorded
and produced several albums, including one of his own, as the owner of CMI Records
(Cash Mattock Inc.). Cash is currently working on his long awaited ground breaking
second album that will be released in 2018. 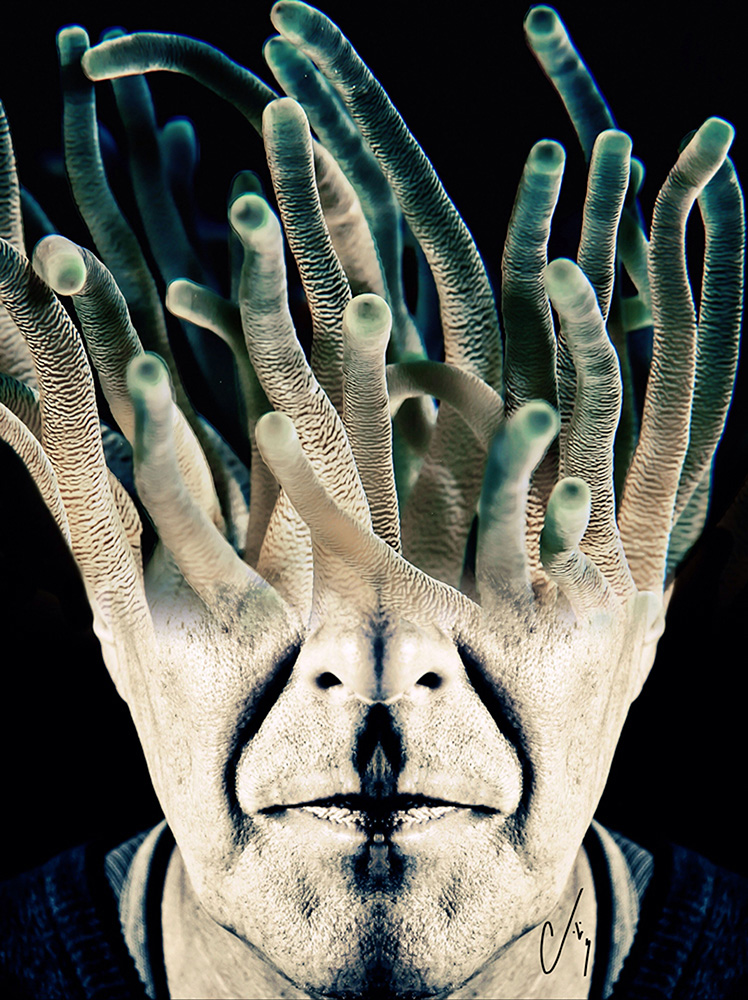 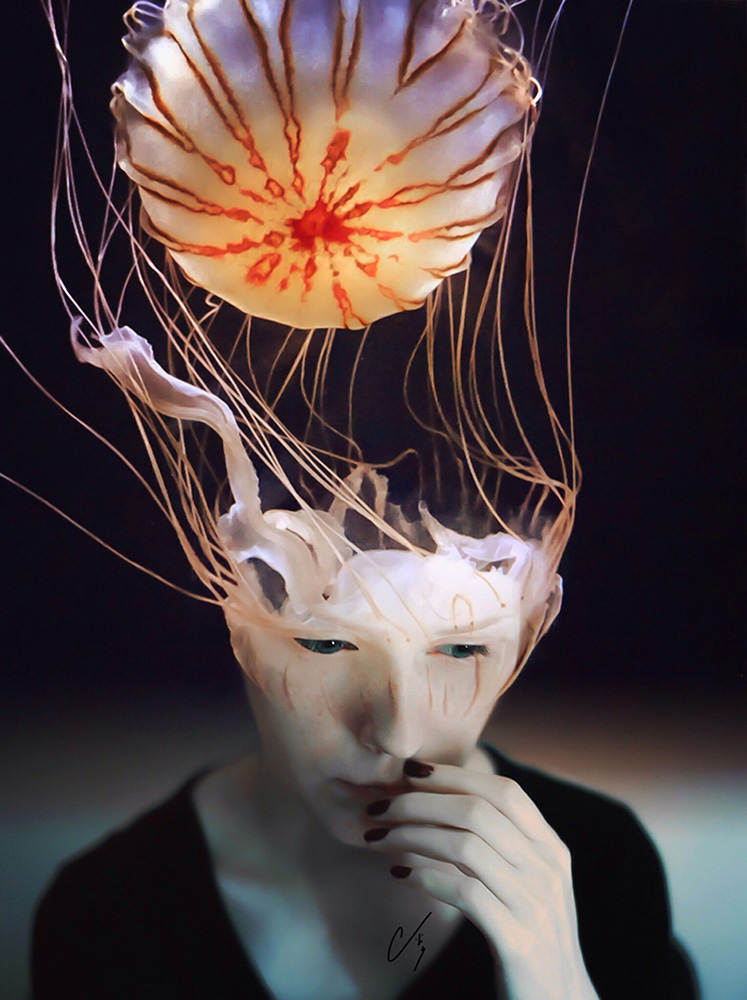 I’ve always used art as a way to filter my life experiences and how to interpret the world.
At an early age I discovered that it gave me a sense of euphoria. I enjoyed the creative
process so much that it became the only way I could fully express my feelings. As I
matured I recognized that the energy that fueled my inspiration didn’t only come from
within me. I became aware that there is a global emotional energy that I’m
hypersensitive to. My awareness of this energy is where the bulk of my inspiration
comes from. At times I used to think it was a curse but after many years of experience
and study I gained a deeper understanding of the universe. My book is a reflection of
this combined knowledge. I think of myself as a purveyor of waves. My creative energy
is released through my artwork as sound and light waves but music is my first love.
Music is created from nothing and if it isn’t captured it’s gone. The artist has to command
the moment. I think about all of my art in the same way. My music and images often
share the same themes. 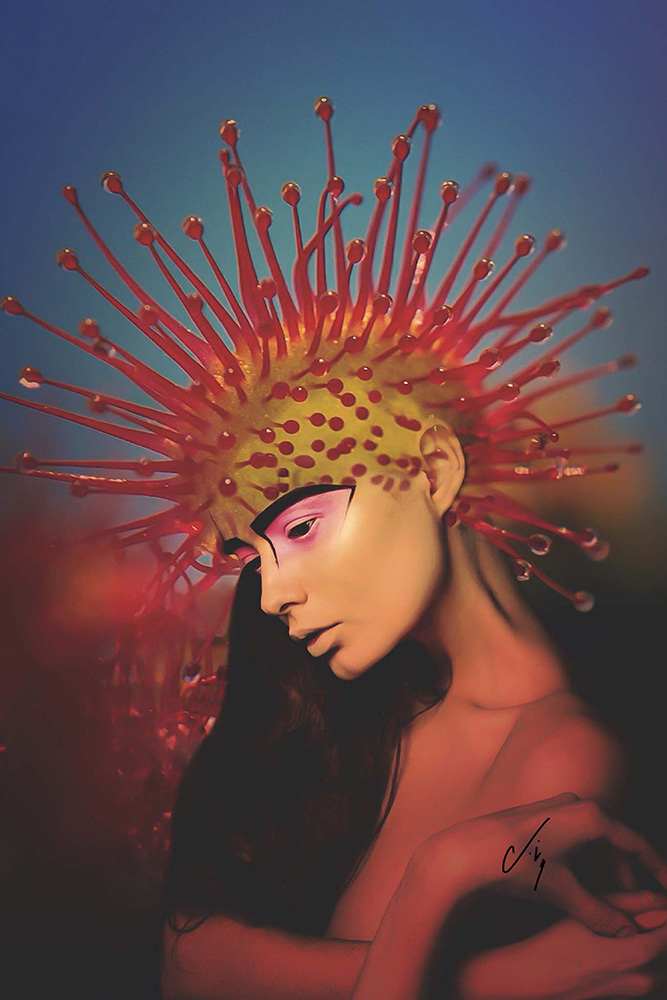 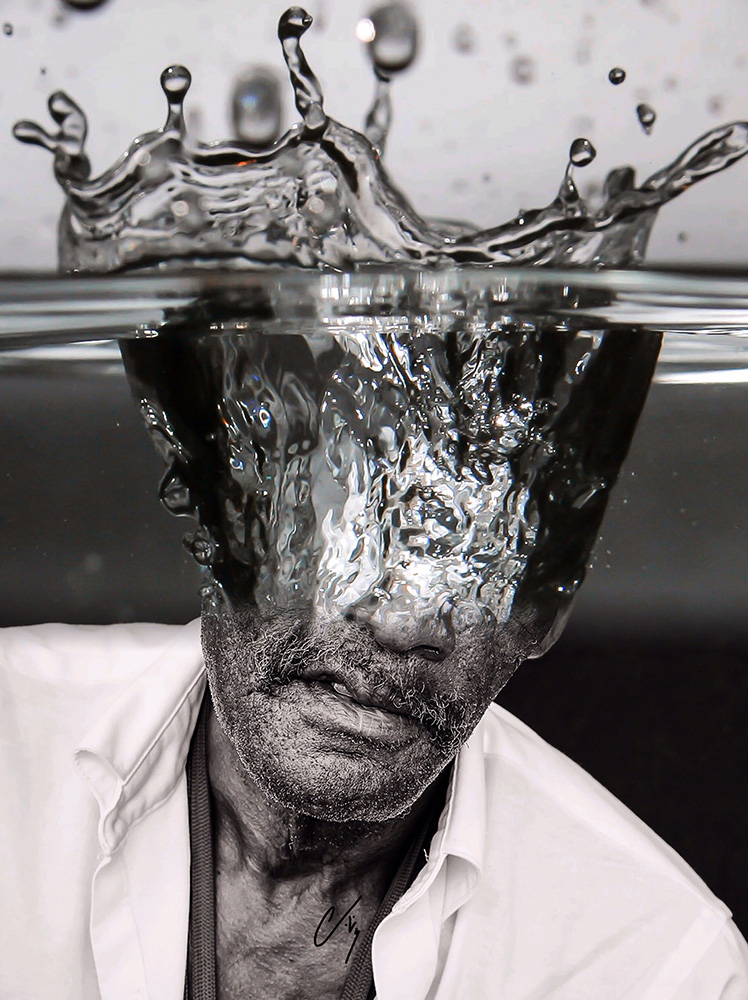 I feel that there’s at least a small chance that I can help the world through my art. That’s
my drive and my passion. Our world needs to wake up. My music and images are
intended to be a mirror. When I create my portrait collages I’m revealing a human
connection to something. This connection could be negative or positive and it could be
established or suggestive. I make connections between humans and Nature in my
images because humans fail to recognize that everything is connected which is also a
very strong theme in my book. I often express a sense of morning for what’s wrong with
the world. Sometimes destruction is necessary for growth but mankind twists this idea.
We are facing the destruction of our moral compass by a deliberate attempt to cloud our
view of reality by glorifying our war with Nature and our wars with each other. We blur
the line between the natural and unnatural or imply that we couldn’t possibly have any
major impact on our environment at all. 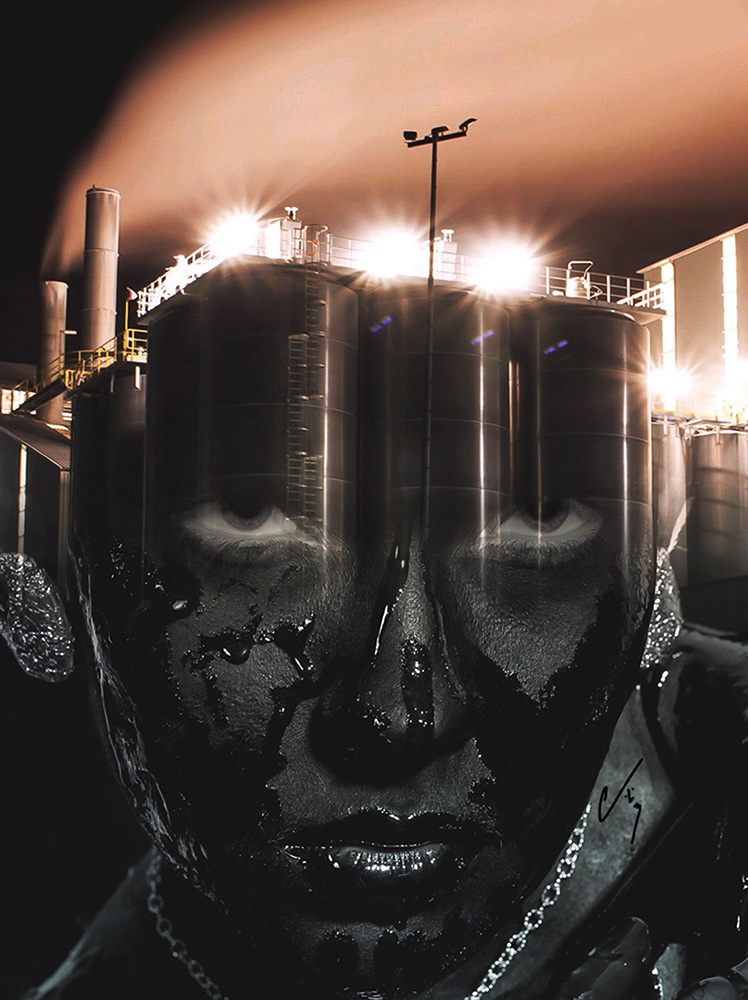 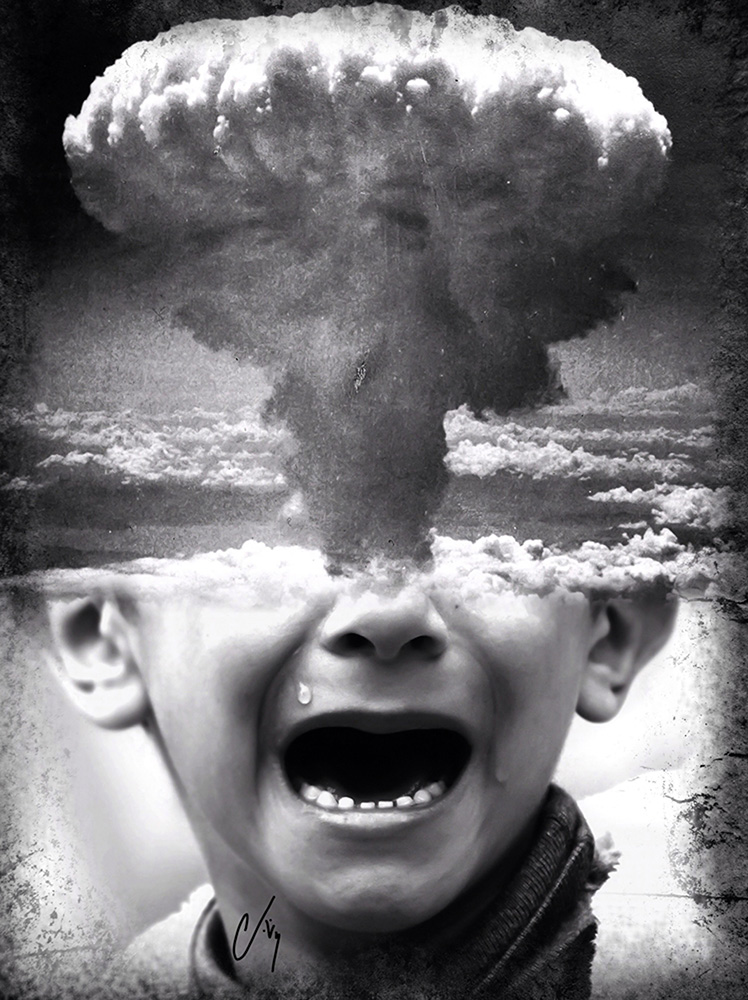 With regard to my visual art I’ve always loved Dali and the surrealist moment but my
biggest influences are Antonio Mora, Matt Wisniewski and Jerry Uelsmann. Jerry
Uelsmann and I both went to R.I.T. which is how I discovered his work. He was a
pioneer in art of photomontage before digital photo manipulation existed. He is a
photographer and master printer who used negatives and enlargers to produce his
images. Matt Wisniewski also attended R.I.T. His work has a strong human element and
his double exposure technique is very unique. I admire Wisniewski’s style but it was the
texture and blending techniques of Antonio Mora that truly awakened the visual artist
within me.

What are your future projects in digital art and how do you think they will evolve?.

The world has recently taken a turn for the worse. Part of our moral foundation has died.
With these changes my visions of the future have become increasingly more real. There
are many outcomes but now I can see the aftermath of these in a lot more detail. The
emotional impact is too strong so I’ll have to find new ways to express myself or it may
eat me alive. I’ve started to create a new series called “Wreckage” which is my
interpretation of the ruins of the human condition. This won’t be enough so I’ll have to
open a new chapter in my creative process. 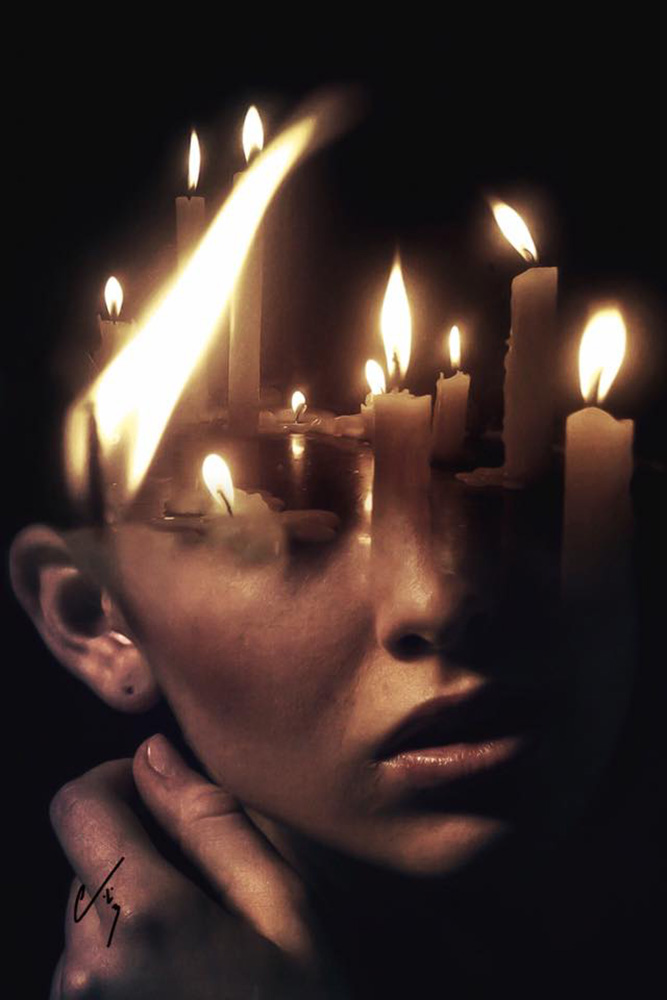 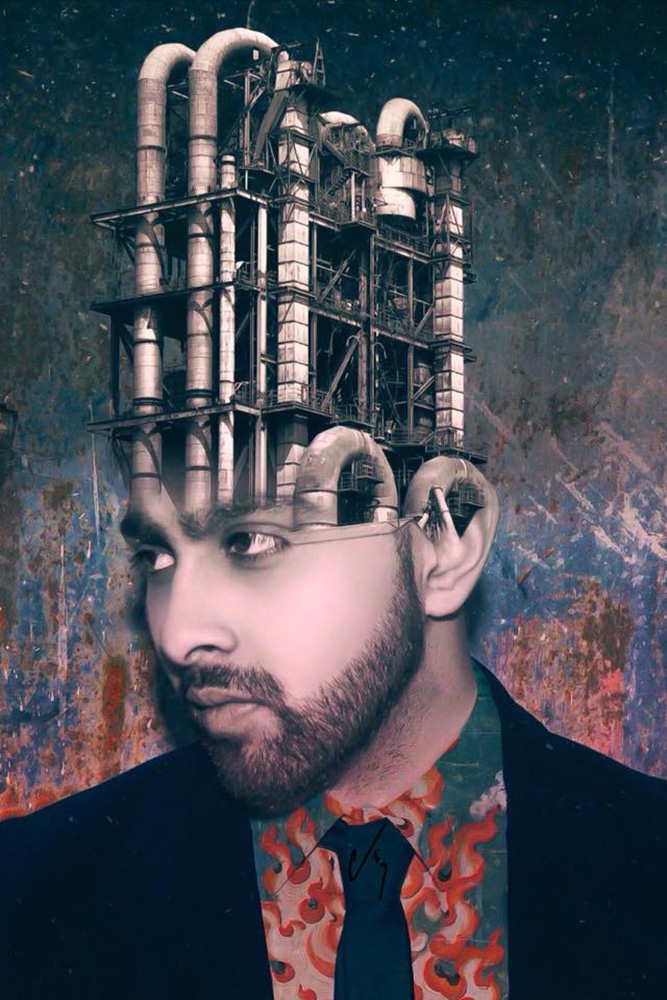 How do social networks influence your work?

The internet exposes us to the virtual world of Memetics. The memes have the ability to
take over the minds of one or more individuals. Good ideas and creative expression can
get lost in the menagerie. Negative ideas or harmful memes can be amplified and
spread a lot easier via social networks. These memes are like festering wounds in the
tissue that makes up the fabric of our society. We are stronger than this so it deeply
affects me to see humanity captured in this way. Social media amplifies this influence.

How does an idea for a digital work come up?

I’ve compiled a library of hundreds of stock photos that I use for my pieces. I’m
constantly adding and deleting photos depending on the need but I try not to use the
same photo twice. Each image I add to library speaks to me in some way. Most of my
pieces are composed of only two images. When I feel inspired I glance through my
library and I find a few images that strike a chord based on what I’m feeling at the time. I
almost always know what images will work together before I start to assemble them.
Then I digitally fuse them together using various techniques and filters. The editing takes
the longest. Each image requires a minimum of three stages but some images require
ten or more. I work in batches of four to six images. I edit each one a little at a time over
a number of days. This keeps the process fresh. 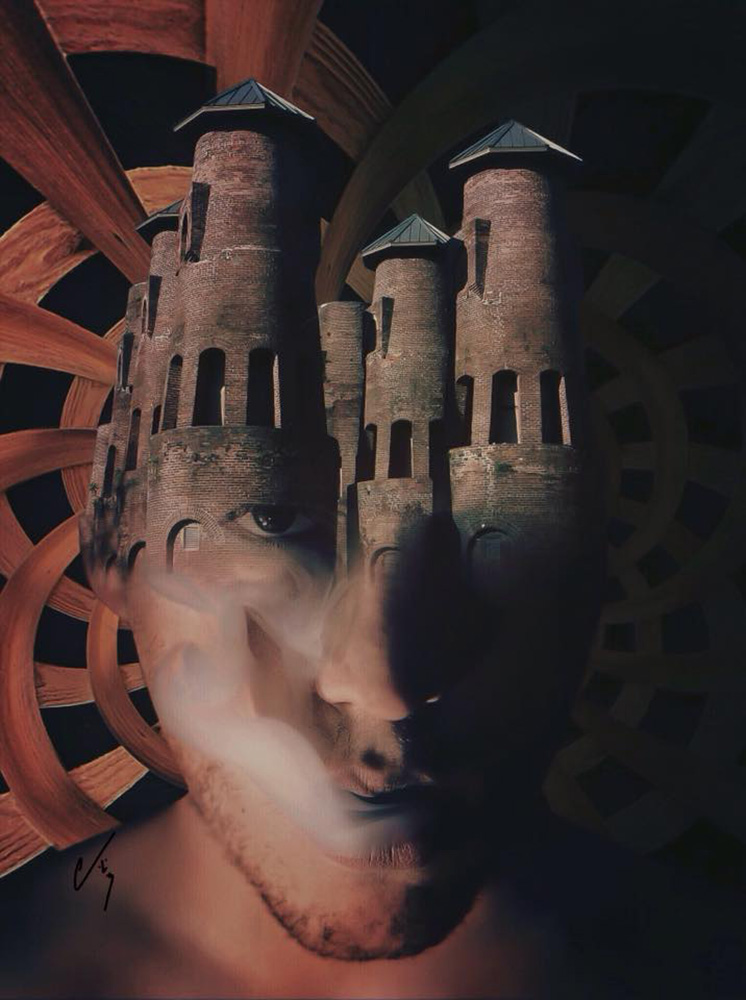