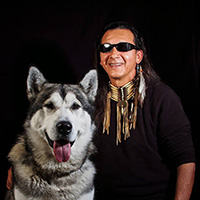 George’s work attempts to recreate the vivid hallucinations that he experiences as a result of Charles Bonnet Syndrome (CBS), a disease that is common amongst patients with partial or severe blindness. Using software to aid the visually impaired, George is able to apply fluid-like, vacillations onto preexisting images to create something that is truly awe-inspiring. Now coined the “Redhawk Effect” by the artistic community, George’s signature style has led to his meteoric (and celebrated) rise within the art world. A former medical professional, George has now dedicated his work to the creation of these fascinating images.

What do you consider to be critcal aspects for the success of a video animaton or gif?

Video and .Gif art is exactly that... it is art. Art should express, invoke, and release feelings and emotions. It should invoke an emotional response from the viewer. It should be "thought provoking". It should be expressive the human condition and something that we as humans can relate to... in essence it soul possess a soul and expressed this from deep within the heart of the artist.

How do you find your own style to create your animation work?

Because my world had become a constant metamorphic, ever changing, funhouse of mirrors and illusions being produced by my mine, rather than actual "sight", morphing software was something that I was very interested in. I felt that morphing was well representative of what I was experiencing and so I began experimenting and realized that if I "morphed" an image to the exact same image, I could produce motion within the image which would always loop back to the original... and "The RedHawk Effect" was born. It was not an easy process, ha ha! It takes time to master the morph but I had a lot of free time, so I worked on it day and night to learn the limits of this medium.

Although my initial intent was to show my perception of the world through my damaged vision, there is a lot more to blindness than people realize. When one is blind there is this immediate sense of "disconnect" from society, the world around you, and of yourself. And where as all people experience feelings of being disconnected at some point in their life, it does not take long for one who is blind to realize that this "feeling" is not a "feeling" at all... it is my new reality. My work made a distinct change at this point as I try to express the emotional impact of this "disconnect" and attempts to "reconnect" on any level possible. it was then that the world began to take notice of my work and felt the deeper meaning it expressed.

What is your inspiratonal source?

As you are probably aware, 15 years ago I suffered from a profound loss of most of my vision due to retinal damage resulting in being registered blind. Although I retain partial sight, I began to experience "Charles Bonnet Syndrome" (visual hallucinations caused by the confusion and disconnect between the data sent from my eyes to by brain). It was initially this that prompted me to try find a way to express my new "altered sense of reality" and I began my on going project, The World Through My Eyes.

How do you come up with an idea to make a video or a Gif?

I like to fine art that invokes an emotional response from me... something that I can relate to and expresses my inner emotions which I have difficulty to express vocally. As I look upon the image, my Charles Bonnet Syndrome causes me to "see" the image already in motion, so when I see an image that relays my emotions and triggers the effects of "my vision", it is something I can't wait to reproduce!

There are always new technologies and sofwares. How do you learn to use them?

Once again, there are many things about the blind community that people don’t quite understand. When you see a blind person walking down a street, there is nothing magical about a white cane, nor even my guide dog. Before I can venture out into the world, I must first be acclimated by a sighted guide and memorize the route on an intimate level before doing it "solo". The same applies to new sofwares, social media sites, "updates", etc.... I need a sighted guide to help me fine my way. Over 90% of what I do with sofwares is memory rather than actual vision, just as navigating the real world. This being said, I am 15 years behind the real world in regards to technology. I do not know how to use a smart phone, I have no idea what an app is or why I would need one other than apps and an ear piece which permits me to make and receive calls using voice command as well as read and write text messages using voice command features.

In my partcular cicumstance, there is a queston I ask myself ofen: How much time do I have left to contnue my artwork?

As my condition is progressive and there is only one future for me, and as my "expiration date" of my remaining vison has already long passed.... the question of time is always present, for which there is no answer.