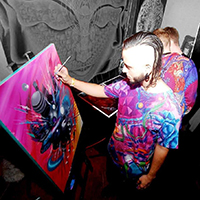 Kaliptus (Born April 16, 1984 in Lisbon, Portugal) is a NY/NJ graduate artist from SVA with a BFA in animation and an MFA in computer art. He uses painting, film, motion graphics, animation, stop-motion, video-mixing, multimedia, interactive arts, installations and more to express ideas that
are usually surreal, visionary and vital to the philosophies and understandings of the human consciousness. Kaliptus has been commissioned to work on projects for Alex Grey, Marvel, Stephen King, DC Comics, Black Tide, MTV, Prudential Center, Zoomdout, Shpongle, Sneaux, Orange County Choppers, American Choppers, and more. He is currently living in New Jersey and is a busy, self-employed freelance artist, working on a wide variety of projects from his home studio..

I get inspired by a lot of that which takes place in one’s direct experience in Life. It doesn’t take much to excite me.  But I definitely lean towards the “transpersonal” side of things. I’m a consciousness enthusiast at heart, so I do the best I can to use modern day tools, like 3d programs on the computer, glitch art, strange feedback loops with analog video or whatever I can as a sandbox for inspiration to create different types of aesthetics for works that often reflect upon the transpersonal realms of consciousness.
.

I’m also very inspired by “Light”, from physics to mysticism & beyond, I seek to study and further understand the phenomena that has been deemed as light specially when it emerges in the form of phosphenes or entoptic phenomena,  or hallucinations, visions, light that one perceives but cannot be measured in the physical world, etc. I’m also very interested in strange phenomena like “shared hallucinations”, via possibly quantum entanglement particularly when 2 or more beings perceive some invisible-to-most object, but can agree on very distinct details and similarities in their private vision description and come to an agreement that they were all channeling the same visual in their own heads. That kind of stuff blows me away. 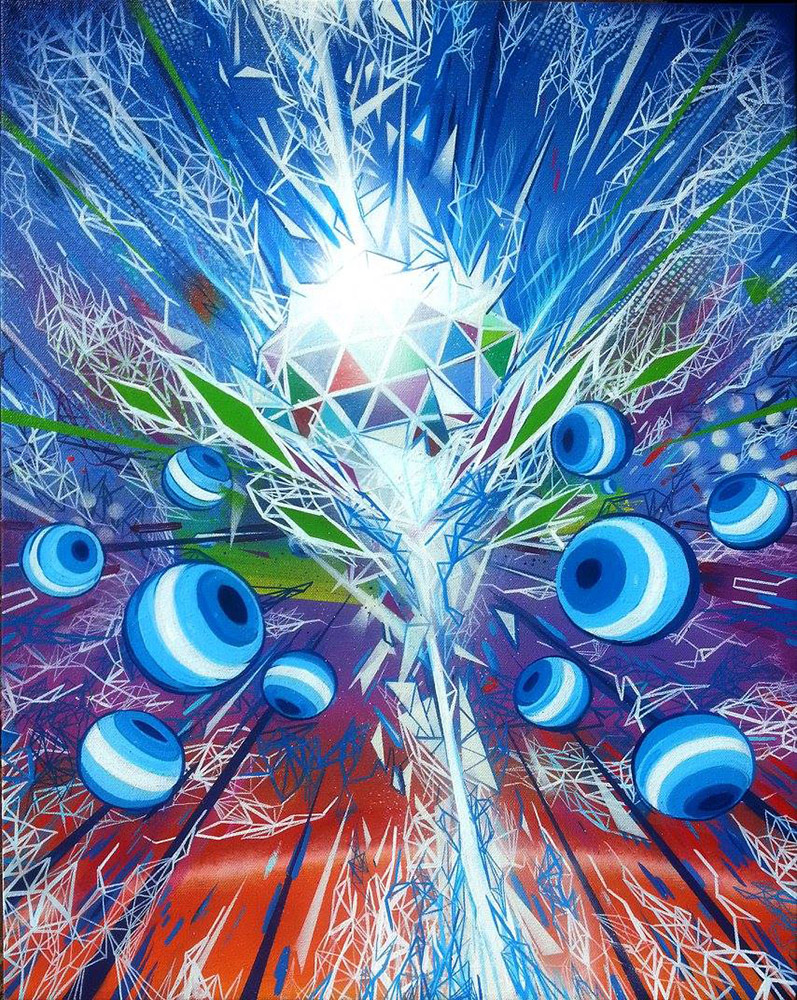 How did you find your own style ?

I guess as a result of being born with a trippy consciousness in 1984, into a world of computers, after the advent of the 60’s psychedelics culture & growing as a child to witness the birth of the internet & beyond, its hard to pin point exactly what led me to develop my current style. I think its less about style and more about me trying to depict certain visions I’ve had with the tools I feel most comfortable with. But I most definitely a “style” has manifested as a result of certain approaches. I think there are many out there doing similar things. People are having detailed visual dreams more and more and they are using modern tools to paint and manifest those dreams. They are like seeds from hyperspace waiting to be unzipped like raw files for cosmic experience… Maybe. But I definitely feel like styles and archetypal expressions of consciousness are collectively emergent and hard to map. I can definitely say that something weird is going on and certain styles of arts are exploding right now, to say the least. When you look at the visionary arts communities or the abstract futurism stuff that’s been coming out, you can start to see this sort of style as a recent but collectively emergent phenomenon.  Each individual is a part of a greater whole, like cells for a super organism. I’m just stoked to be a part of this wave movement and to have the health and chance of life to express all of the beautiful things that have inspired me along the way.

The Infinity in a Grain of Sand 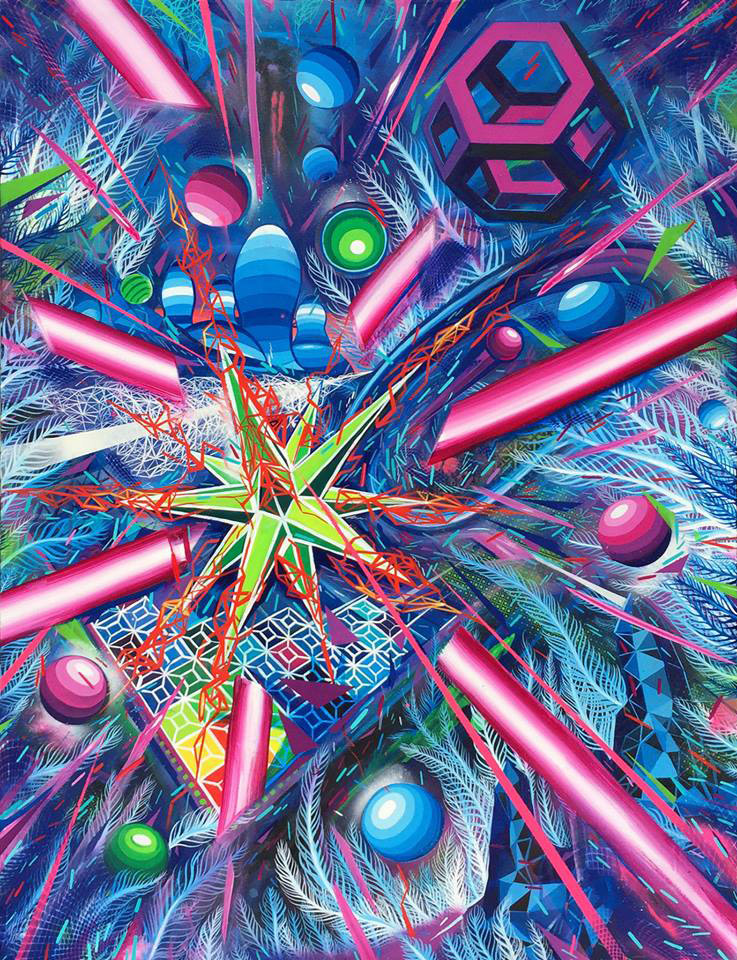 What are your main materials to create?

Recently I mostly used acrylics paint, a very little bit of aerosol here and there & different types of acrylic polymer mediums. As far as brushes go, I love the script liner. I can line with it shade with it, etc. I use all kinds of brushes but if I had to pick one brush I always fall back on my scrip liner 1 or 0 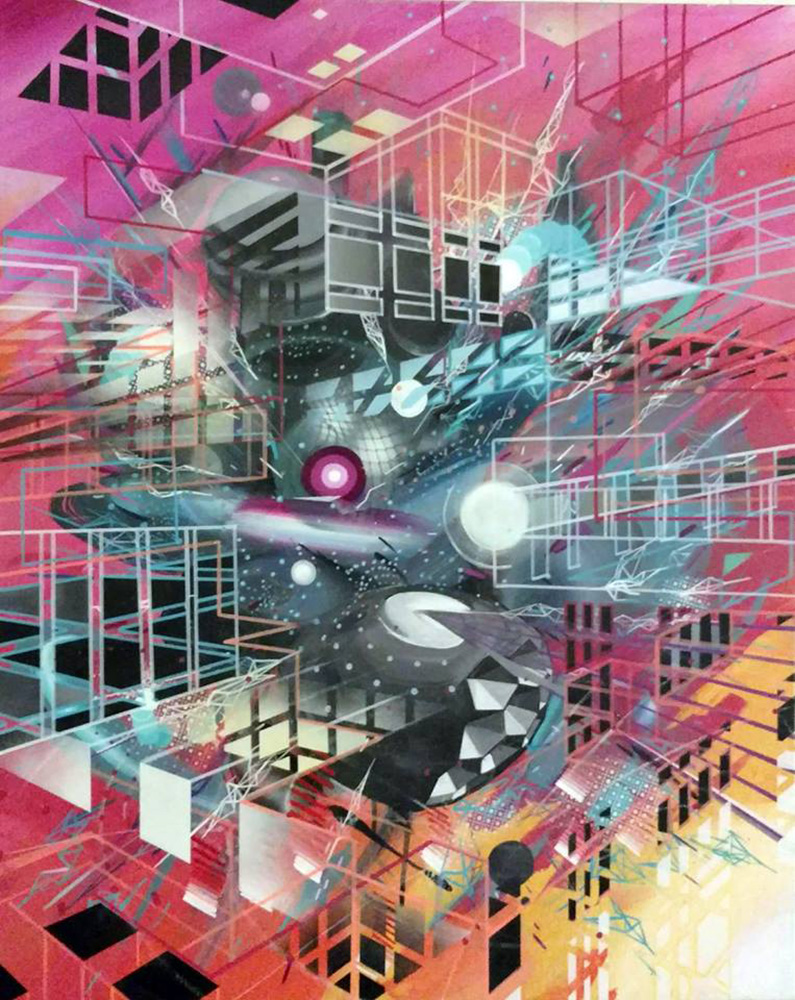 Do you remember your first work in which you decide to be an artist? what would it be, tell us about it.

First work I could remember takes place in Portugal, in a small town by Lisbon called Alcochete. I must have been like 1 and a half. My mother had just bought brand new white furniture for the living room and I was also recently gifted my first set of markers. They left me alone for a few hours with my first art tools and when they cam back they experienced their first mural. I must have been in a trance, I remember dazing off and just going. The entire furniture was covered in this new mural, and I probably would of gotten hit if I had a father figure early on in my life, but my mother was actually impressed. She called the neighbors over and they too were impressed. Maybe it was good a good mural for a 1 and a half I don’t remember, but feeling of liberation and artist expression might have seeded my current endeavors. TY mom! 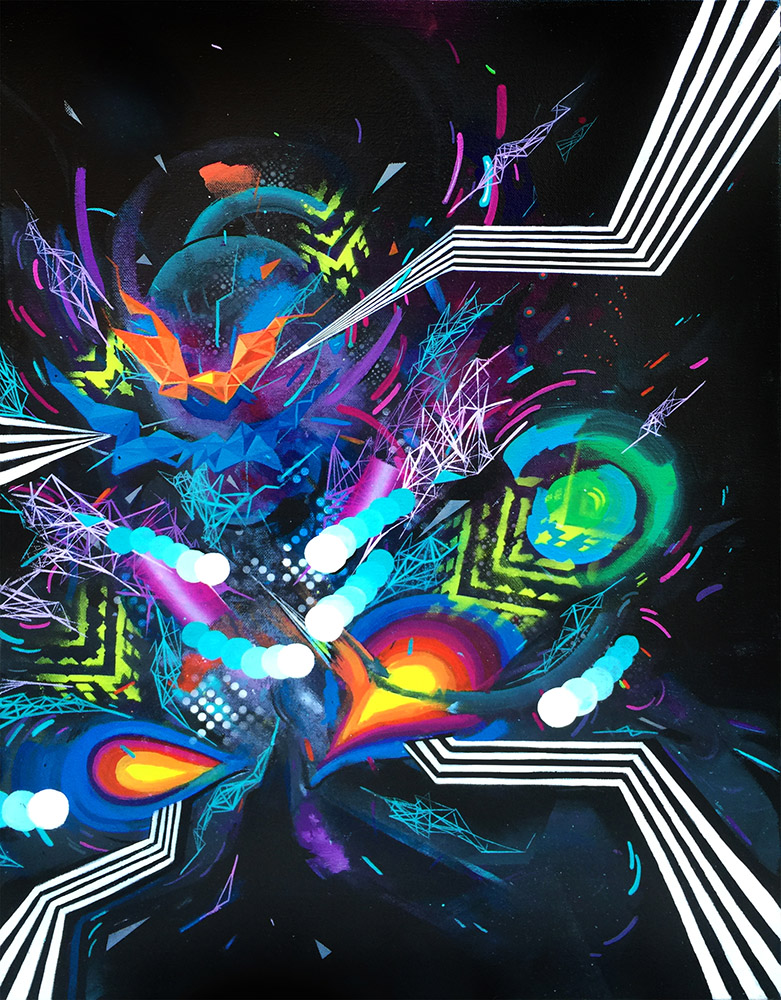 What aspects do you consider to be critical for the success of a painting or Drawing?

Never quit. Even if you don’t like your first 107 paintings or drawings & you’ve wiped 50% of your time on most of those works, maybe its that 108th piece that opens up the flow for all of the good stuff, etc. Always push yourself to improve your craft no matter what the circumstances.
. 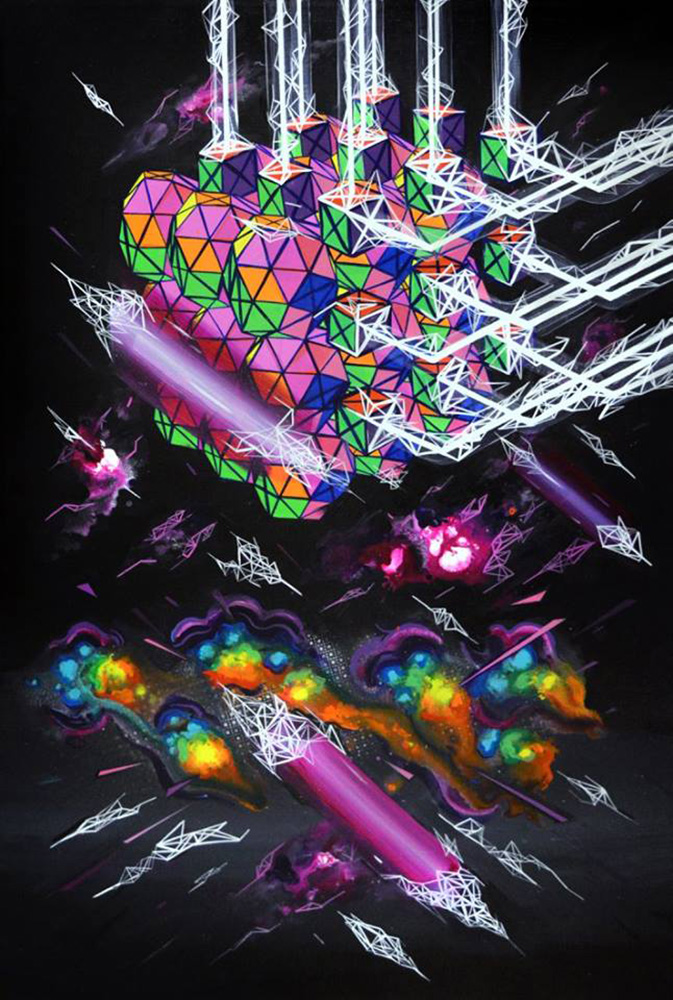 The Motion of Non-Motion